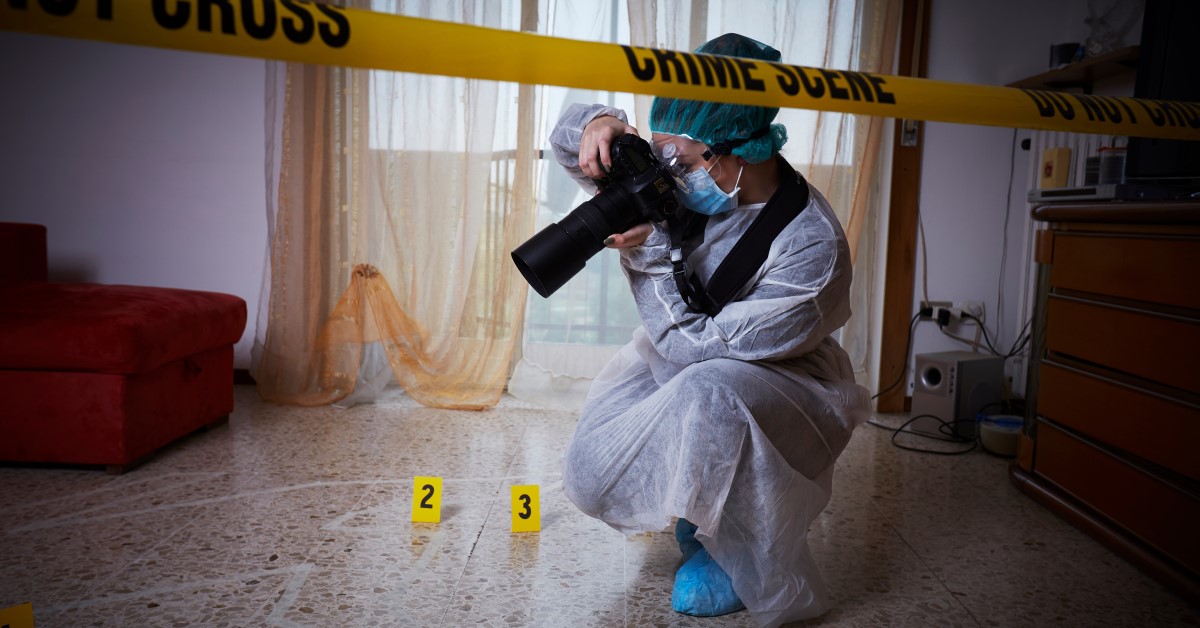 In Part 1 of this blog post we outlined how conducting house-to-house enquiries, analysing CCTV evidence and conducting property searches helped police to locate and convict serial killer Anthony Hardy for the murder and dismemberment of two prostitutes in Camden, North London.

This evidence alone, however, was not enough to convict Hardy for the murders of 29-year-old Elizabeth Valad and 34-year-old Bridget MacClennan. The police still needed to uncover more evidence to link Hardy to the horrific crimes, and this is where forensic science and innovative luminol search techniques helped towards Hardy’s eventual conviction for not two, but three murders.

Following the forensic strategy, the torso is taken for post-mortem examination and the tools are sent for analysis.

“To prove if a weapon has been used, scientists need to find trace evidence of the victim and the suspect.

“When examining the hacksaw blade, you would be looking for evidence of DNA on the teeth of the hacksaw – bone or any fragments of blood or tissue to be able to tie this hacksaw to either of the victims in the dismemberment.

“To dismember a body with a hacksaw requires a lot of force, so you would be looking on the frame of the hacksaw for any fingerprint evidence where the hacksaw has been pushed down. Any fingerprints that have been recovered from the hacksaw frame would be submitted to the National Fingerprint Database to see if there are any matches on any known offenders,” Sarah added.

The swab samples were sent to the lab to see if they matched a profile on the National DNA Database. The post-mortem report confirmed that the torso found in Hardy’s bedroom matched some of the limbs recovered from the first two crime scenes. The pathologist also made a discovery on the torso, which could have provided a breakthrough in confirming the victim’s identity. He extracted the cosmetic implants that resided within the torso.

The clinic that undertook the procedure was located in Germany, and investigators knew that because the clinic’s unique reference number appeared on each and every implant that they manufactured and inserted. They were able to provide officers with the patient’s details. The serial numbers identified 29-year-old Elizabeth Valad as the other victim. Further investigation revealed that Elizabeth worked as a high-class escort, which led her to London’s red-light district, Kings Cross.

While the manhunt for Hardy continued, the results from the hacksaw tests had been returned. The fingerprints found on the frame matched Anthony Hardy, and there was a mixed DNA profile found on the blade. Part of the profile matched Elizabeth Valad, and the other matched the torso found at the first crime scene.

This was run through the National DNA Database and a match was found. Bridget MacClennan, a 34-year-old mother from Central England, was the victim of Hardy’s recovered from the first deposition site. Detectives had now confirmed the identities of both victims.

Continuing the search for Anthony Hardy

The hunt for Hardy intensified while forensic teams continued to look for potential evidence in his flat. They discovered a roll of black bin liners located on Hardy’s desk, which were then sent to the lab for testing. “Bin bags are really interesting because you can link bin bags to rolls of bin bags,” Sarah commented.

Forensics were then tasked with finding out whether the bin bags found in Hardy’s flat were from the same roll as the bags containing the women’s body parts, which would have further implicated Hardy.

“The bin bags that were used to wrap the body parts in have unique markings on them, such as variation marks and manufacturing marks. They also have marks where they have been pulled off a role. The bin bags were forensically matched to those found in Hardy’s bedroom.

“If you compare bin bags by looking at the individual perforations and seeing what matches under a microscope, you can determine whether they have come from the same roll. The bin bags that were used to wrap the body parts in derived from the same roll,” Crime Scene Investigation Trainer Sarah Thirkell said.

At Scotland Yard, the digital forensics team were also making progress with their inquiries. The digital forensics specialists extracted data from a Nectar card discovered in Hardy’s flat, and found loyalty points earned from the purchase of bin liners made two weeks before the body parts were discovered. To corroborate this evidence, they analysed the supermarket’s CCTV and found Hardy purchasing bin liners. Further CCTV evidence from the first crime scene location uncovered Hardy disposing of bin bags down Plender Street where some of the body parts had been discarded. By this point, all the different strands of the investigation were beginning to come together.

To further strengthen the case against Hardy, the forensic team had to confirm their suspicions that the murders and the dismemberments occurred in his flat. To determine if there had been a clean-up of blood, the CSI team used a breakthrough forensic technique called luminol. While no blood was initially apparent in the flat, forensics used state-of-the-art luminol on the walls and surfaces.

“Luminol is used for examining areas for blood traces. If there’s suspicion that an area has been cleaned up, luminol will pick up traces of blood on surfaces,” Sarah said.

Any traces of blood would react with the chemicals and glow in the dark in a bright blue colour. Owing to its chemiluminescent glow, luminol revealed that there had been an excessive amount of blood in Hardy’s bath and on the bathroom floor. Luminol also revealed blood on the door to the bathroom, which had been wiped from that location and was an indication that something bearing blood or bleeding had been dragged along the floor into that bathroom. Despite the clean-up, luminol revealed that there was once an excessive amount of blood in Hardy’s bedroom and bathroom.

As a registered diabetic, detectives knew that Hardy would soon have to obtain another supply of medication from a pharmacy, hospital or doctors’ surgery. All the local hospitals were alerted to this and were supplied with photographs of him, as well as details and contact numbers in case he was spotted. University College Hospital in London contacted the police and said they believed Hardy visited to pick up some medication. From the hospital’s CCTV footage, officers were able to confirm that it was him. He was eventually arrested after being spotted by an off-duty police officer and his son near Great Ormond Street Hospital in London when collecting a prescription for insulin.

When being questioned by police he repeatedly answered “no comment” but was later charged with the murders of both Elizabeth Valad and Bridget MacClennan, as well as Sally Rose White who was previously believed to have died of natural causes. During his trial at the Old Bailey in November 2003, Hardy pleaded guilty to all three murders and was sentenced to life imprisonment. He died in police custody in 2020 at the age of 69.

Are you looking to upskill your crime scene investigators? Do you want them to learn from a team of experienced CSI consultants like Sarah Thirkell?