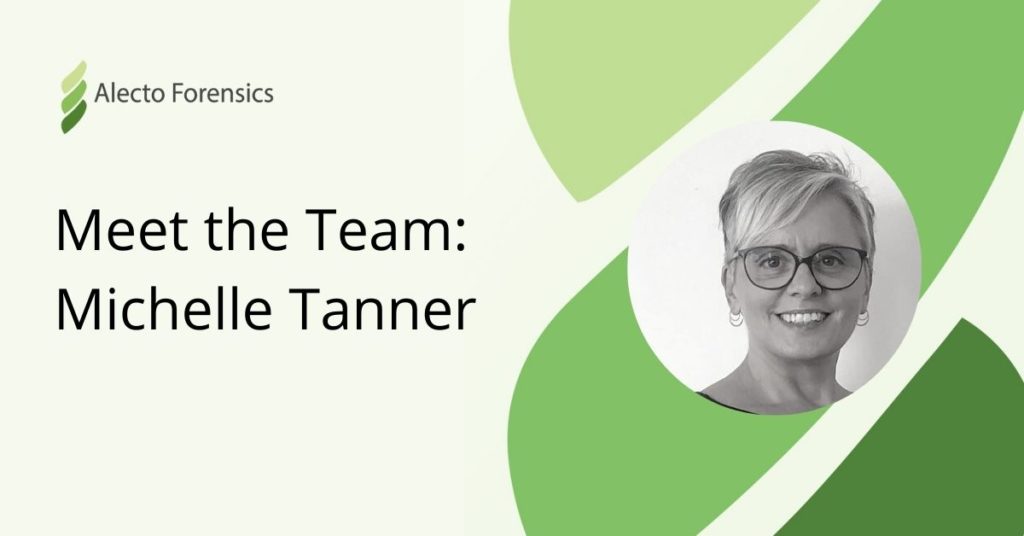 In the next instalment of our ‘meet the team’ series we sat down for an introduction with Michelle Tanner, who joined the Alecto team this week in the role of CSI Trainer. Having worked for sixteen years in the world of forensics for Wiltshire Police in Swindon, Michelle has a wide variety of experience in actively training both new and experienced police officers in crime scene investigation (CSI).

Reflecting on how she knew that she was ‘cut out’ for forensics, Michelle recalls the most memorable scenes she’s worked on as a CSI expert and describes the thrill of finding the evidence you’re looking for at a crime scene.

When did you first know you wanted a career in forensics?

“When I left school I wanted to be a hairdresser originally, but it never transpired. I had always dreamed of being a paramedic, but I didn’t study at university, so I thought it was out of reach. I ended up taking a job working in my local hospital.

“I was working in operating theatres and saw some pretty gruesome operations in the orthopedic and trauma departments. This made me realise I had a strong stomach, so I arranged a meeting with the Chief Ambulance Officer in Swindon. He informed me that there was a vacancy coming up in the department and that’s where I started out on scenes and scenes of crime. It was the role in the ambulance service sparked my interest in forensics to be honest!”

How did you get into crime scene investigation?

“When I went out to jobs that involved police (such as suicides or sudden deaths) I was always fascinated in what crime scene input there was. I was so interested in that side of things and those types of jobs in the ambulance service because I knew police and CSI involvement was the next part. I always wanted to stay and see what happened next, but of course we were always getting called to the next job.

“Around that time an ex-colleague of mine at the hospital had recently taken a job working as a CSI. She told me there was a job available within their unit. I applied for the role with my background in the hospital and emergency medicine, and I had also enrolled on a photography course.

“That was sixteen and a half years ago now! I absolutely loved my time in the force, and I never looked back. I still enjoyed examining bodies and I was still able to use some of my ambulance training with medications, injuries and other aspects of CSI.”

What’s been the most rewarding aspect of your career?

“Working with victims. It was rewarding to know that you were always doing the best you could to help them through one of the worst things that could possibly happen to them. Getting the best results for them was also incredibly rewarding. I really love the customer facing aspect of it all.

“Another satisfying part of it all was getting identifications – lifting fingerprints from burglaries and other scenes of crime. There’s nothing like the buzz of finding the evidence that you’re looking for and seeing results in court!”

What is the most memorable scene you’ve worked on?

How has CSI changed throughout your career?

“When I first joined we had a small team, covering our county, it was like a family. We would also do more jobs – it wouldn’t be uncommon to go out and attend seven or eight burglaries in a single day. You might have even attended a couple of vehicle break-ins as well while you were en route. It was much easier back then.

“Nowadays there are tri-forces. Wiltshire Police are now joined with Avon & Somerset, Devon & Cornwall and Dorset. This meant that you are going into work each day not actually knowing where you were going to be. You will have to take provision for different things because you didn’t know when you’re going to get food next.

“With the introduction of ISO, the time spent at a scene takes much longer with lots of additional administration. In recent changes, CSI are now conducting mobile phone downloads, in addition to attending scenes, which takes a large amount of our time, meaning more time in the office than historically we have been used to.”

What do you think the future holds for crime scene investigation?

“I’m hoping that the team sizes will increase. Looking at the training that we’re doing as a provider, it seems that there are more people flooding into the industry now than ever before, whereas previously we were more reliant on training up staff that already had various levels of experience.

“CSIs would leave for a whole host of different reasons (such as retirement) so now the forces are trying to play catch-up and training brand new people. It can take a couple of years before you feel comfortable attending large burglaries or major crime scenes independently. The staff demographic has changed, with new younger staff, which is great but we’re losing a higher level of expertise and experience.

What advice to you have to offer for someone new in the industry?

“Don’t expect to know everything and don’t be too afraid to ask questions. There’s no such thing as a silly question!

“I think for a while it’s quite frustrating knowing what to do with certain exhibits, learning how best to package, process and store things once you have recovered them. There are many things like this that take time to get to grips with. You’ve also got to be prepared to work quite long hours and travel a fair distance.”

How authentic is the crime scene investigation we see on television?

“Viewers get such a false impression of what we do. You may see us turn up to a burglary and the victim will say that an offender has touched a certain item, which may not be suitable for fingerprint or DNA analysis.  It can be quite difficult managing people’s expectation of what CSI can do, when on the TV they get results from every surface imaginable.

“In murder scenes on TV you also see detectives going in and looking over a body without any PPE on. However, we’re almost virtually unidentifiable under all that material.”

What are your hobbies?

“I love to sew and I enjoy making handbags in my spare time! I received a gift from my colleagues on my birthday which was a voucher to go to a sewing class. That’s where I learned to make them.

“I also love walking. I live close to fields and so I often go out walking. My colleagues bought me a National Trust membership as a leaving gift, so I’m looking forward to using that.”

Alecto Forensics is a leading provider of professional training services, delivering expert training to law enforcement personnel across the UK.