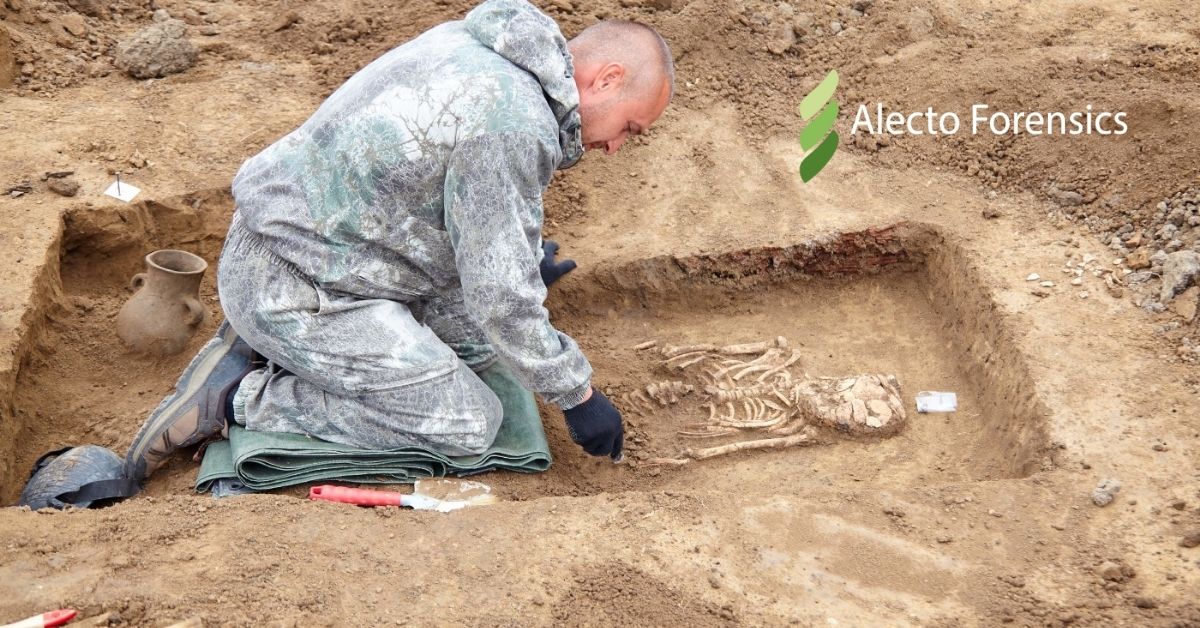 How would you define forensic archaeology?

“Forensic archaeology can be defined as the application of traditional archaeological techniques in the search, location, excavation and recovery of human remains and other items of evidence.”

When and how is forensic archaeology used?

“There are several different methods by which archaeological evidence can be utilised such as reconnaissance, search, location, excavation, reconstruction and interpretation.

“The method used is dependent upon the stage you’re at in the investigation. Reconnaissance reports are employed in the planning stage, while search, location, excavation and recovery are used during the active phase of evidence gathering. Reconstruction and interpretation would be used during the recording and reporting phase, prior to court.”

What are some of the common misconceptions about forensic archaeology?

“There are many! The most common one, in my opinion, is that anyone can dig, and we only dig up bodies from patios. This could have been brought on by the CSI effect.

“Another is that it only involves excavation, which couldn’t be further from the truth as it also involves reconnaissance, search, location, excavation, recovery, reconstruction and interpretation.”

“Finally, and perhaps most amusingly, ‘where are the dinosaurs’ is another common question we receive!”

What are the strengths of archaeological evidence?

“Archaeological evidence can be used to establish a relative chronology/sequence of events through individual layers and episodes of activity. This information is identifiable in the archaeological records as context.

“It can also assist in the production of forensic and search strategies by providing intelligence for targeted search and excavation areas, or on the flip side it can eliminate other areas – therefore narrowing search parameters.

“Identification and collection of evidence discovered by using forensic archaeological techniques in the examination of deposition area could help link a suspect or tools to the scenes, for example, footwear marks in grave bases, and spade marks made during grave digging.

“Additionally, archaeological techniques can also provide crucial information on the position of a victim through archaeological recording processes which may assist in disputing a suspect’s statement regarding the manner of burial.”

What are the limitations of archaeological evidence?

“Ultimately excavation is destructive, and vital evidence risks being overlooked if not conducted in a meticulous manner by trained and experienced professionals.

“Moreover, accurate recording is essential for interpretation, reporting and reconstruction.”

What can be recovered?

“Through excavation you can recover a wide variety of evidence of forensic significance. This includes human remains, evidential items, personal belongings and clothing, tool and footwear marks, trace evidence and information regarding the context such as layers of activity and interpretation of chronology.

What other disciplines is forensic archaeology complemented by?

“Forensic archaeology is often used in conjunction with other ecological disciplines such as anthropology, botany, entomology, diatoms, geoforensics, radiocarbon dating and stable isotopes in order to provide a comprehensive examination.”

“Soil, botany and diatom samples taken from the scene by an archaeologist can link suspects, vehicles, tools, clothing and footwear to the specific location, while entomology can be used to establish time since death or deposition.

When did archaeological evidence enter the field of forensics?

“Forensic archaeology was first used in a murder investigation in the UK in 1988, in the Jennings case.

“Stephen Jennings, a three-year-old boy from Yorkshire, was reported missing by his father in 1962. Despite their best efforts, police were unable to locate the young boy and the case went cold for a considerable period of time. Twenty-six years later, his remains were discovered in a shallow grave not far from his home.

“This was the first time in a criminal trial where the jury heard from a forensic archaeologist regarding how the body was positioned, concealed, and in what season the deposition of the remains had occurred.”

We have over twenty years of forensic archaeology experience within major crime investigation and pride ourselves on being an independent, quality-driven forensic service provider. We have a host of accredited experts and our expertise is available 24 hours a day, 7 days per week.

To find out more about our forensic archaeology services contact us via Tel: +44 (0) 1772 715050 or by emailing us at info@alectoforensics.com.