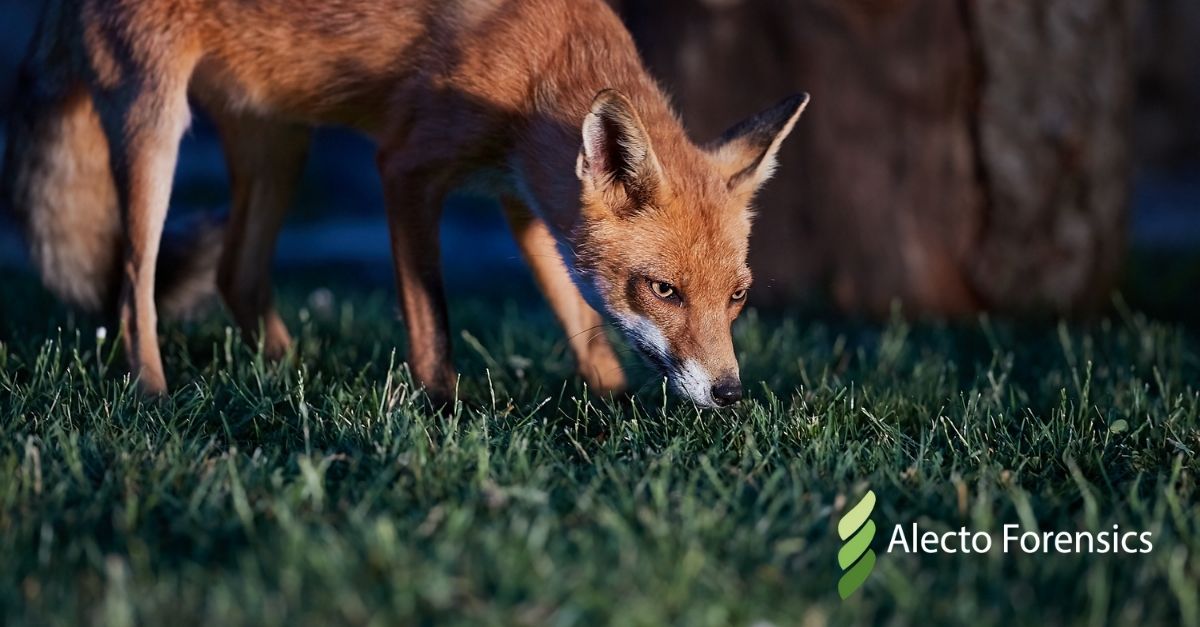 Research conducted by William Haglund on animal scavenging led to the creation of a model that pinpoints the sequence under which animals tend to scavenge and disarticulate human remains after death. The study on patterns of skeletal damage has been widely accepted by the scientific community in determining whether a body was scavenged while intact or sometime after natural fragmentation of the corpse had begun.

The animals in the study, which was conducted in the Pacific Northwest region, largely consisted of coyotes and dogs as the natural scavengers. The observed post-mortem time intervals revealed that the scavenging occurred between 4 hours and 52 months after death. The following sequential stages were observed by Haglund and his team: Stage 0 = no bony involvement; Stage 1 = ventral thorax damaged and one or both upper extremities removed; Stage 2 = lower extremity involvement; Stage 3 = only vertebral segments remained articulated; and Stage 4 = total disarticulation (Haglund et al, 1989).

Animal scavenging tends to involve the dispersal of body parts such as arms, legs, bones, feet, and fingers – items that animals can scavenge from the corpse itself. In the case of a dismembered body, wild animals are prone to removing and dispersing those individual items that have already been disjointed from a corpse. Because of this, animal scavenging is mostly seen in murder cases.

Animal scavenging specialists inspect the local area and determine what animals are likely to be in the environment. This is a crucial step in the crime scene investigation process as the species of animals in a given habit will change depending on whether the area is woodland, urban or rural. At this point, investigators will be looking for animal runs, dens, and droppings to identify potential areas of interest for the search teams. This will provide them with an indication of places to look for missing body parts.

Cadaver dogs, also known as victim recovery (VR) dogs, can be used to support investigations involving animal scavenging as they are trained to detect blood, human bodies, and body parts at crime scenes. According to Alecto Forensics’ animal scavenging specialist, Matt Jones, “they are able to locate and identify evidence that may have previously not have been recovered. They may also locate evidence more quickly within a large search area, therefore progressing the investigation.”

“Not all police forces and forensic providers across the UK have access to cadaver dogs, so I stress that it is important for CSIs to try and get hold of one if possible – you can even get them for mutual aid from other forces if your own force doesn’t have access to them,” he said.

VR dogs are also trained to identify and indicate crime scenes which includes items contaminated by human tissue, blood or seminal fluid such as clothing and weapons.

The lack of access to cadaver dogs often means that CSIs do not have exposure or training regarding their use in crime scene investigation. As part of our comprehensive CSI Conversion/CSI Stage 2 training course, Matt will set up hides to demonstrate to participants how they can be used to support forensic investigations.

“I will often use cannabinoid CBD oil that derives from hemp plants because my dog was trained on detecting cannabis. It helps to emphasize truly how beneficial dogs are and goes to show how small quantities they’re able to detect. They can find bloodstains that are the size of a pinprick,” he said.

The training process for cadaver dogs begins with clicker training. When they locate the item that’s been hidden for them to find, they will receive clicks as a form of reward and positive reinforcement.

The training then moves into detection of blood. Trainers will place down five containers, four of which are clear and one of which contains blood. They will walk the dog along on a lead hoping that they will ignore the four clear pots. When they make any recognition of the pot containing blood they will receive a click and an overall reward (often their ball).

This then gets built upon slowly – it’s a long process. The next time the dog may recognise the blood for a bit longer and when this happens the trainer will extend the time they click for. After this, it will then escalate to ‘real world scenarios’, which involves trainers placing blood in a pavement crack and walking along the pavement, thus encouraging the dog to identify where the blood is.

As part of our CSI Conversion/CSI Stage 2 training course, Matt also discusses successful cases with the use of VR dogs and the search methods used by the VR teams. This includes grave identification and the possibility of probing the ground to identify the victim’s deposition site, as well as the importance of communication between VR dog handlers and Crime Scene Investigators/Crime Scene Managers.

We offer a variety of bespoke training solutions, including our popular CSI Conversion/CSI Stage 2 course which covers cadaver dogs search theory as well as a practical demonstration.

To find out more about Alecto training courses Tel: 01235 426030 or fill-in our online contact form.